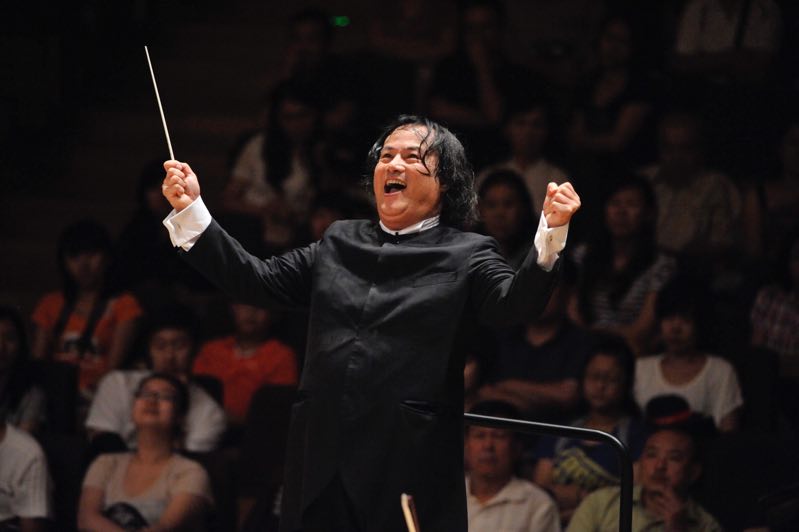 Muhai Tang hails from Shanghai receiving his frst musical training at the Shanghai Conservatory of Music and subsequently at the “Hochschule für Musik und Theater in Munich.

He began his international career in 1983 conducting Berliner Philharmoniker’s concerts at the invitation of his teacher Herbert von Karajan.

He performed on stage with some of the most internationally renowned soloists such as Lord Yehudi Menhuin, Marta Argerich, Pierre Fournier and Sir Giuseppe Giacomini among others.

His invitations were not limited to orchestral but included also operatic concerts; he was appointed Chief Conductor of the Finland’s National Opera in Helsinki, he conducted Rossini’s Otello and Le Comte Ory with Cecilia Bartoli at the Opernhaus Zürich both flmed and released by Decca Records as DVD productions.

He then went on to become the first Chinese conductor to lead a new production at La Scala in Milan during the EXPO 2015, this again being Rossini’s Otello. Starting from 2017 he has been conducting each year in China the Wagner’s Ring Cycle. His enthusiasm for opera drove him to successfully conduct the Chinese premiere of the original opera “Marco Polo” by the CPAA Theaters at the Guangzhou Opera House in 2017 and its world premiere at Teatro Carlo Felice, Genoa, Italy in 2019.

He continued his venture of bringing European opera to China conducting the Chinese premieres of Debussy’s Pelléas et Mélisande and Britten’s The Turn of the Screw in 2016 having much earlier in his career conducted Wagner’s Flying Dutchman in Shanghai Grand Theater Opening with Shanghai Symphony Orchestra and Deutsche Oper am Rhein.

In the course of his career he collected many prestigious international awards in particular the Grammy Award of America in 2004, the German “Echo-Klassik” Award in 2006 and the 2017 Italian International Opera Awards (Oscar della Lirica); he is the only Chinese conductor who has won such awards in this century.

Muhai Tang is fascinated by musical adventures. In 2015 and 2016 leading the Tianjin Symphony Orchestra he accomplished to great acclaim some series of concerts in two years featuring the complete symphonies of both Beethoven and Mahler juxtaposing one composer with the other in the same program.

Not only has he toured with European orchestras, he has also toured with many Chinese ensembles in China and the rest of the world: in particular with the Shanghai Chinese Orchestra he has presented traditional Chinese music at such prestigious venues as the Barbican Centre London, the Paris Philharmonie, the Berlin Philarmonie and the Hamburg Elbphilharmonie when touring in 2018.

In 2019 he conducted the grand opening ceremony of the Asian Cultural Carnival in the National Stadium of China (The Bird’s Nest) and on 20th July of that year he led the Harbin Symphony Orchestra from China to give a successful performance at the Salzburger Sommer Festspiele for the festival’s opening ceremony; the HSO is the oldest orchestra in China, having been founded in 1908, and of which M.to Tang is the artistic director and principal conductor.

Alongside conducting Muhai Tang is also extensively involved as artistic director of several music festivals and takes great interest, as a professor of diferent conservatories, in supporting musical education and giving encouragement and technical guidance to the young generation.

Among many chief positions of diferent orchestras all over the world, Muhai Tang has been the Laureate Conductor of CNSO in Beijing for 15 years.