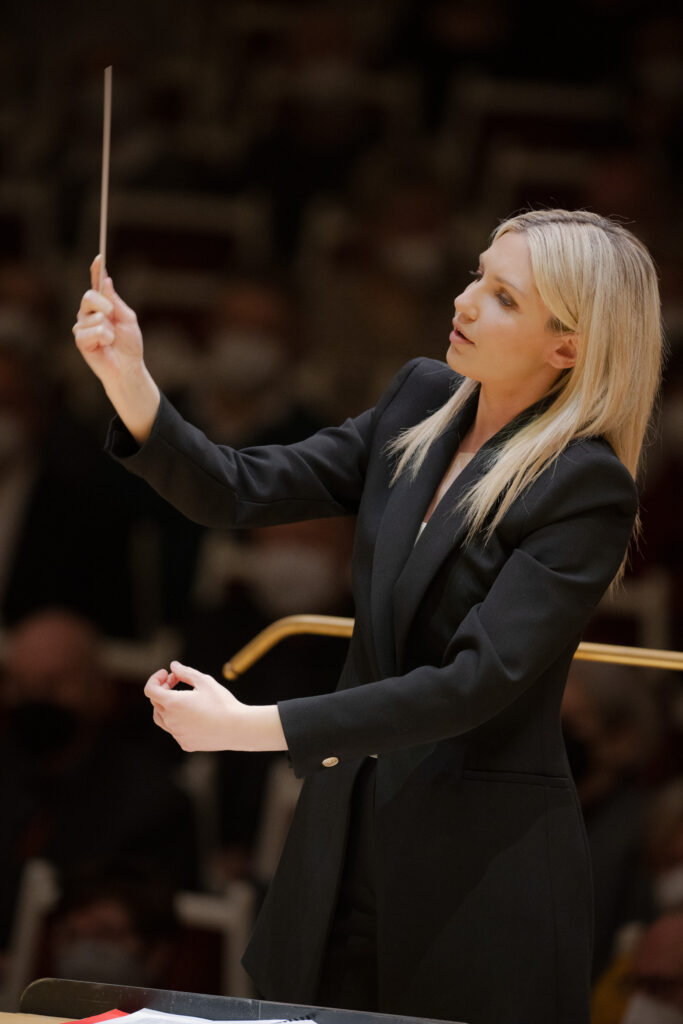 Internationally renowned pianist, Vanessa Benelli Mosell is rapidly establishing herself, in equal measure, as one of the most interesting personalities of the young generation of conductors.

She is continually praised for the brilliance of her technique and the sensitivity of her musical intuition that she applies to her way of playing the piano, as well as to conducting and conducting from the piano.

After completing her orchestral training with Prof. Luca Pfaff in Strasbourg, Vanessa trained with mentors of the caliber of Colin Metters, Rüdiger Bohn, Uros Lajovic and Günter Neuhold.

In 2019 she was a finalist in the Mawoma European Conducting Competition – Maestra Women in Wien, winning the second price.

In 2022, after conducting the Lithuanian State Symphony Orchestra and the Polish orchestra Filharmonia Kameralna im. Witolda Lutosławskiego w Łomży, she was invited by Klassische Philharmonie Bonn to conduct a tour in some of the most important concert halls of Germany as the marvelous Konzerthaus Berlin, Laeiszhalle (Hamburg) and Liederhalle (Stuttgart).

Vanessa has received excellent feedbacks from the critic, enthusiastic about her performance as a conductor:

“Vanessa Benelli Mosell is a Universal musical genius. She must have an unlimited capacity for absorption, because the program …
even though it does not contain unusual compositions, it’s also not the most common repertoire pieces…
After the first bars it was clear that this was matched by a straightforward and elegant conducting”  –  Westfalenblatt

Vanessa Benelli Mosell began her comprehensive musical studies at the age of three. At seven years old she was admitted at the International Piano Academy in Imola, giving her orchestral debut as soloist at the age of nine followed by her New York appearance at eleven years old with pianist Pascal Rogé, who described her as “the most natural musical talent I have encountered in my entire life”. In 2007 she entered the Moscow Tchaikovsky Conservatory under Mikhail Voskresensky, before pursuing her studies with Dmitri Alexeev at the Royal College of Music in London, where she graduated in 2012.